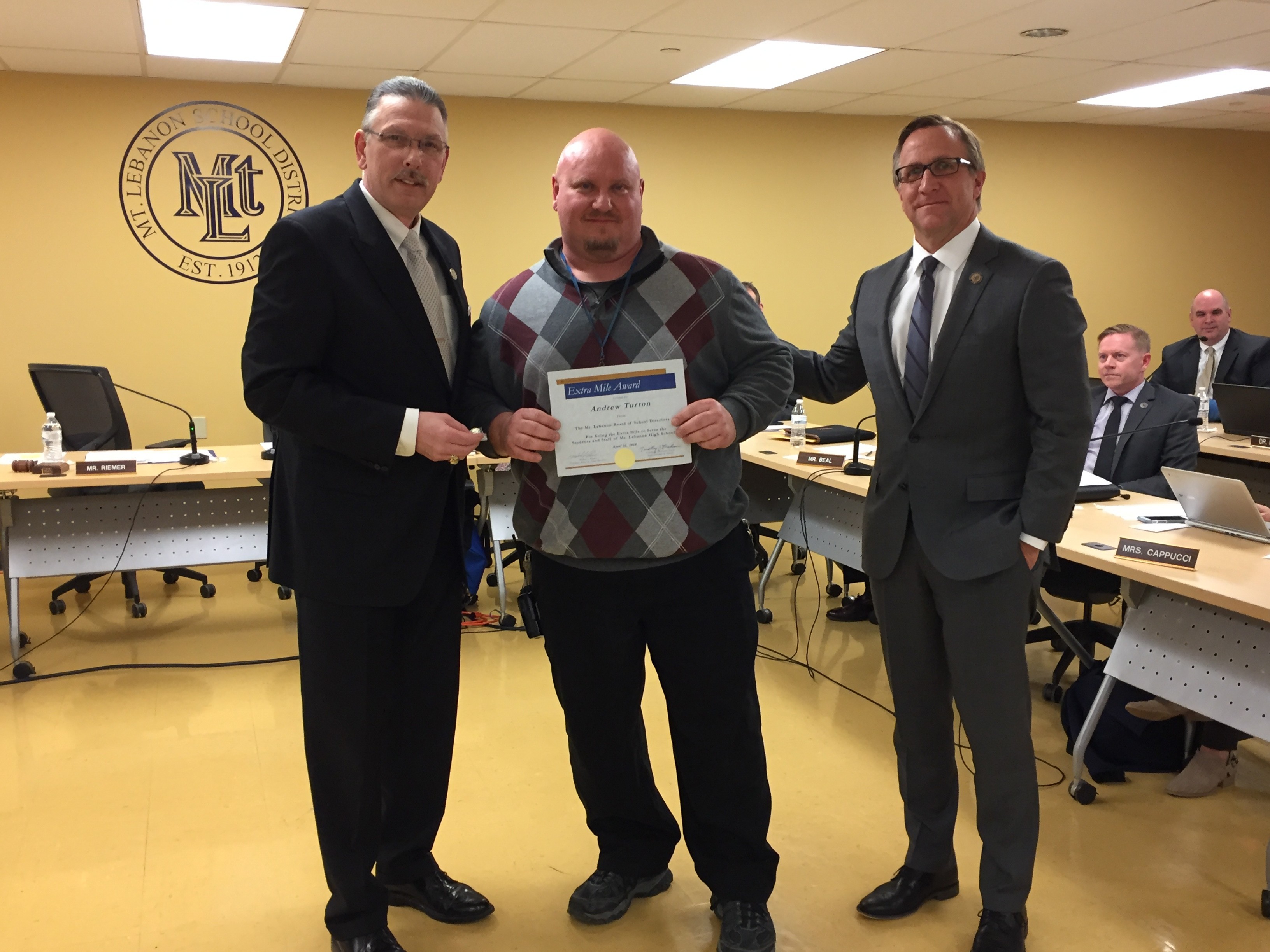 High School Head Custodian, Andrew Turton, was honored with the Extra Mile Award by the School Board at the April 16 School Board meeting. Mr. Turton was nominated by Mrs. Julie Maselko. Here is an excerpt from the nomination:

"I have known Andrew since my oldest daughter started kindergarten at Foster 12 years ago. I got to know Andrew, or Mr. Andrew, as the kids and parents knew him and still do to this day, quite well during my time at Foster as PTA President and Chair of the Playground Committee. While at Foster, Andrew was well known for greeting a crying child at the front door of the school after hours when they would return, distraught, to retrieve a book or homework assignment they forgot. By the time he took them to their classroom/locker and counseled them along the way, they left with a smile on their face. He was also known for giving special, behind the scenes tours, to some "special" students who earned that as a reward for good behavior. Despite his large, intimidating stature, he was and still is, a favorite with the students because he has a heart that's just as large.

As our luck would have it, when my younger girls left Foster for Mellon, Andrew was promoted to head custodian at Mellon and moved on right along with us. I was once again PTA President and just like at Foster, Andrew was quick to help us with any request, even some of my more outrageous ones, and most times already had things done before we even asked because he was always so up to date and in tune with the needs of the school and students.

As luck would have it again, Andrew moved up the head custodian position at the high school a few months before my older daughter started her freshman year. Are you sensing a pattern here? As I'm sure you can guess he quickly became a student and staff favorite at the high school. I tend to be around frequently and 9 times out of 10 I see Andrew...Andrew working...Andrew watching "his kids", as he refers to his Foster kids he's seen grow from kindergarten into young men and women, play in numerous sporting events... Andrew watching "his kids" on stage in concerts, plays, and musicals. It was at one of these sporting events last fall that I got to learn about another reason why Andrew is so great. A parent of a student with physical limitations came up to Andrew and me while we were talking at a football game and asked if he was Mr. Turton. She wanted to thank him for what he had done for her son. Apparently some concessions needed to be made for her son to navigate the school better and through her son, she had heard that Andrew went above and beyond what was required. Although she was a little teary eyed, I wasn't surprised because I see all of the time the things that Andrew does that are above and beyond."

Congratulations to Mr. Turton on this well-deserved recognition.